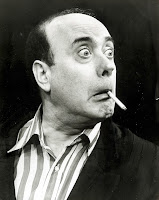 Victor Spinetti has passed away.

A fine comedy and character actor, he was an under-rated talent who never quite achieved the fame he should have.

He had roles in three Beatles movies -  The TV director in A Hard Day's Night, Professor Foot in Help! and the Army Sergeant in Magical Mystery Tour. Spinetti continued working in film and television until around 5 years ago. From all accounts he was a charming gentleman that the fab four admired and respected.