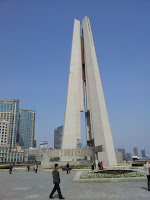 My first awards night, at least the first one where I was nominated. And it's a real thrill to hear your name called out as part of the shortlist.

I told Jo Anderton and Alan Baxter I was hoping for a three-way tie. At least that's what I told them. I didn't really mean it. Jo deservedly won the Ditmar for Best New Talent. Elsewhere Paul Haines won the Chronos for Best Short Story with his amazing story, The Past Is A Bridge Best Left Burnt.

OK, so I would have loved either one of those little trophies, but the truth is Jo and Paul both deserved them for their work, and no-one can begrudge either of them. I've been writing for only about two and a half years, so simply to be nominated was a thrill and a validation.

Congratulations to all other winners, and look out for me in the future.
Posted by Steve Cameron at 2:36 PM