I Really Wanted To, Felicia! 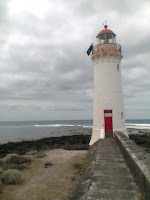 Someone told me about The Guild. You know, the internet gaming sit-com created by Felicia Day and much loved by lots of people including Joss Whedon. They told me I'd love it, that it was right up my alley. So I went online, hunted it down and watched it.

The good news, with episodes that are around 4 minutes long, is that you can watch all four seasons in about a 20 minutes. (OK, so I exaggerate - I can't be bothered doing the maths) The bad news is it's extremely average. Sorry Felicia, I really, really wanted to love this.  Not that I hated it - I just wouldn't be worried if I missed future episodes.

On the other hand, no one told me about Generation Kill, or Spaced. Both wonderful, clever and well-written.  I loved both of these. Spaced I borrowed from the library, simply because I liked the cover, and Generation Kill I bought on a whim, based on its connection to The Wire.

I need to do that more often - act on a whim. As Mia said, it's more fun to be a pirate than to be in the navy.
Posted by Steve Cameron at 7:12 AM No comments:

When I was much younger, my favourite show on TV was The D-Generation. And then a few year's later it was The Late Show. And then over the years I've pretty much loved everything The D-Generation and Working Dog has produced, whether on TV or on the radio. In fact, for a while in the 80s, I dreamt of being part of their shows.

So when I bumped into Santo Cilauro in a supermarket down along the Great Ocean Road, and simply said "Santo" as if I was meeting up with an old friend, Santo smiled with a look of puzzlement as though he had no recollection of who I was and yet should have. (Sorry about that, Santo!) We chatted for a few minutes, I apologised for interrupting his shopping, and then he wished me a good holiday. It was only later that I realised I forgot to ask him what Working Dog were planning next.

I also booked tickets to go and see Hawkwind.  Yes, not only am I an SF tragic, but I'm also a an old metalhead. And so much the better if you can combine the two. Should be a good evening though.

In between all this I've started reviewing books for Dark Matter. That's been kind of cool too. Check out Issue One online. Issue two is well into production and should be with us soon.

And then I've been watching lots of film and reading lots of books too.  I even liked Bran Nue Dae, which I didn't think I would enjoy at all. But Mary Poppins was indeed a highlight of the summer.

Practically perfect in every way.
Posted by Steve Cameron at 6:44 AM No comments: