Racing Around the Sun Again. 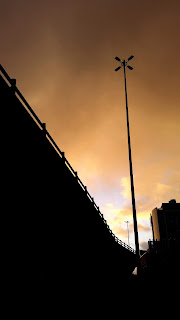 Another year is drawing to a close, and there is so much left undone. Not that I am one for resolutions, but like most people I have goals - either specific and planned, or vague and loose. I did complete some of my plans, but along the way other plans intruded in my life. And as I undertook those, other activites were pushed onto the backburner by necessity.

Yeah, that novel I never started at the beginning of the year never happened later either. And I doubt I'll have it done (or even commenced) by New Year.

I'm OK with that, because I have achieved other things this year I never thought I would. Big things. For reasons of my own, I'm not sharing these at the moment. One day, when the time is right, I will.

We've almost completed that arbitrarily designated end to yet another journey around the sun. Another year, another orbit, another winter.

It's getting darker and colder. I'm heading out to work and returning home with my headlights on. Soon it will be dark as I arrive and leave the office. For some people this is depressing. For me, and maybe because it's a bit of a novelty still, I enjoy it. It means Christmas is coming, and Christmas makes a lot more sense here than it ever did in Australia. The lights will be up in the streets, and we'll have warm cosy evenings snuggled around roaring fires.

Think about it. Christmas as a northern hemisphere celebration is out of place in Australia. Having experienced a few up here, it's obviously a transplant. I always enjoyed it, but it never felt right.

As out of place as a sausage sizzle at an English hardware store. Yeah, Bunnings tried that here and it failed. As did Bunnings as a store. They've pulled out of the UK, having bought Homebase for large sums of money and selling for next to nothing.

Guess I'll just have to go and buy a Bratwurst in a bread roll on the high street, all wrapped up in my scarf and jacket.
Posted by Steve Cameron at 2:37 PM No comments: