My Kind Of SF Movies. 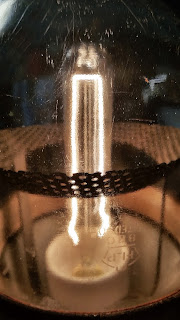 It's been a while since I've seen so many SF films that I've enjoyed. For a few years now I've been disappointed with the long breaks between quality SF film.  Sure, there's been a ton of superhero movies, and while many love them they are not my cup of tea.

In fact I was recently speaking to someone in the film industry, and they were lamenting the current domination of these films - Marvel in particular. So much Marvel product is being made that it's affecting investment and production in other, non superhero movies.

Don't get me wrong. There have been SF movies that I enjoyed, or even loved. Ender's Game, The Force Awakens, The Lobster and Ex Machina are films I adored. I might even be one of the few who will openly admit to quite liking Jupiter Ascending as well. But for every one of these there is a Prometheus.

Bleah!  (And please, remember this is only my opinion on these films. Like most art, taste plays a large part of what is considered quality.)

Interstellar needed work. It dragged on and then turned metaphysical with a 'happy ever after' ending. From all accounts Christopher Nolan ignored the original, darker ending and rewrote it. I think Nolan is over-rated as a writer and director. Most of his work needs clarity and focus, and a much gentler touch. Inception, for example, could have been so much better. I've also yet to love a movie by Neill Blomkamp. I've previously written of my disdain for District 9, a movie which most people seemed to rate highly. Elysium was even worse. It made little sense at all, and was full of plot holes Nolan could drive a starship through. Latest word is he may not be attached to the Alien sequel after all, which I consider good news. In addition to these, there were a lot of other so-so SF films during these years.

But in the past 15 months or so I've enjoyed the two Star Wars films, The Martian, and Arrival. Guardians of the Galaxy was a lot of fun, and even Passengers, which seemed to upset a lot of people, was nothing more than it pretended to be. And I quite enjoyed it. And there was a lot more. Ghost in the Shell, while not the deepest of films, was visually beautiful and better than I expected it to be. I must point out the setting reminded me of a cleaner, more prosperous Blade Runner world.

Speaking of which we have the new Blade Runner movie to look forward to - and if it's anywhere near the quality of director Denis Villeneuve's previous work, (Incendies, Sicaro, The Arrival) we should be in for a real treat.

Plus the new Star Wars movie in December.

Posted by Steve Cameron at 2:53 PM No comments: