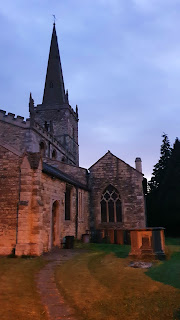 We went to see Steeleye Span again this week.

I last saw them on their 50th anniversary tour about two and a half years ago. They were touring on the back of a new album, Estd 1969, which I think is one of their strongest recordings in many years. The lineup, too, is perhaps the best since the classic lineup(s) of the late 70s.

The show was good. The band was great, sounded wonderful, were really tight, and rocked out. It was, however, well into the tour, and Maddy's voice was patchy.

I know Maddy doesn't have the range she once had - that happens to mature voices, but this was more than that. Either she was (or had been) ill, or her voice was tired from the tour.

When tickets were announced for a show in Lincoln, I didn't hesitate. I still wanted to see them. Again. A band which has been around since the late 60s? Who knows how long they can continue.

I was a little disappointed Benji Kirkpatrick didn't appear on stage. And then I noticed the fiddle player wasn't Jessie May Smart but another woman. The rest of the band, however, were the current lineup. And they were good. They were a precision unit. Maddy introduced the fiddle player, Violeta Vicci, but didn't explain whether she was replacing or covering for the fabulous Jessie May Smart. Alas, there was no mention of Benji Kirkpatrick at all, so I have no idea if he was unavailable or had left.

Violeta did an admiral job, on apparently her 6th gig with the band. As a multi-instrumentalist, Benji was sorely missing - especially on tracks like the January Man, where his loping banjo sets the tone and meaning of the song. Liam Genockey and Roger Carey were as solid as ever on drums and bass respectively, while Julian Littman (guitar) seemed to have an even better outing than the last time I saw them, and Andrew Sinclair (other guitar) shone yet again.

But the best part? Maddy's voice was in fine form. Sure, we weren't treated to Gaudete (although I suspect with some arrangement and a drop in key she could handle it), but they either chose songs to suit her range, or she reworked her vocal lines to suit her range.

They opened with Little Sir Hugh, which was especially meaningful as not only is it the very first song I ever heard from Steeleye (and I became an instant fan within seconds), but his remains lie less than a mile from this venue. For those unfamiliar with his tale, I have previously told his (and my) tale.

During the intermission, I grabbed their new album (a re-recording of their 1969 original release) and managed to find Maddy tucked away in the foyer. She graciously signed it for me, and I was able to apologise to her for embarrassing myself the last time I had met her in Melbourne in the early 1980s. I didn't explain, but she laughed and told me not to worry as it was all forgotten.

And Maddy, should you by any chance ever be reading this, thank you for all the recordings, all the shows I've seen, and for the time you took to sign an album or two for me. It is truly appreciated.

Posted by Steve Cameron at 4:44 PM No comments:

Rainbows, Smiles and Leaving the Urghhh Behind. 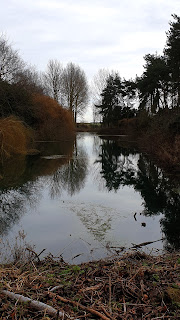 I was sitting at work this afternoon, one of the few times I have ventured into the office since we were allowed to return, and rather enjoying the change of location after so much time at home, and the comfortable companionship that comes with the presence of others working quietly in the office.

I was sitting in  the corner, with large windows behind me. The clouds were low, darkening, and it started to rain heavily. After a while it stopped, and the ladies facing me from across the office started pointing and laughing. Through the window, behind me, was a large, bright rainbow. I turned to look at it, and the colours were broad and clear.  The ladies informed me that from where they sat, it appeared to come down into my head.

"Ah yes", I said. "I am the pot of gold at the end of the rainbow in an otherwise dark and dismal world."

I was, of course, joking. I can be grumpy along with the best of them, and I actively have to work to remember to smile at gatherings of family and friends in case they think I am bored and angry with them. But it did remind me that it is important to maintain a positive outlook in these times.

Recently, I felt slighted. A social media post I made (no surprises there) resulted in a stupid and thoughtless comment. Instead of responding, I simply deleted their comment. My wall, my rules, and I can say what stays on my wall.

For similar reasons, I left a couple of Facebook groups which I used to enjoy, but were bringing me down with their negativity. And do you know, I haven't missed them at all.

Some may have noticed that, for the most part, I try and maintain a positive attitude on social media. There is a fine line between keeping an "up" attitude online and creating a fake, happy persona. I don't want to the be the guy who makes out he has the perfect life, posting only images of holidays, meals and so on, but I do want to not be brought down by the angst and anger which pervades social media.

And so into my real life.

I started each week at work (from home) with some gentle, pleasant music. I am well aware of the emotional effect music can have on me, and so I figure choosing the right tunes early on can shape my mood for the day, if not the week. I login to my team's chat and try and say hi, offering virtual coffee, and having a laugh with anyone who happens to be around.

I get up from the desk and stretch, take time out to play with my dog, and go for walks. I also try to eat healthily and not drink too much coffee.

And that's all we can do, isn't it?  The best we can in trying times.

Posted by Steve Cameron at 8:23 PM No comments: