Jack of All Trades, But Masters Of None? 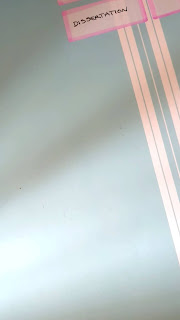 I haven't written much fiction (if at all) in recent times. Mostly this is due to my studies which have consumed most of my free time for the past few years. These studies, however, can no longer be used as an excuse for my lack of fiction writing, as I completed my dissertation last month and next week those results will be ratified at the official Board of Examiners.

So I am very pleased to (shortly) possess a Master of Arts in Digital Technologies, Communication and Education (with Distincion).

I commenced this course in saner times, as it tied together my interests and experience in Education and Digital Technology. It was also integral to landing a job in this field, which I commenced early in 2020. Little did I know that the world as we knew it would soon end, and my role and training would soon be very much in demand.

And so with a new job I was trying to learn while working remotely and away from the team, I completed my studies under a lot of pressure and difficulty. But completed they were, and now I'm free. Of study, at least. For the time being.

And before you ask, No, I am not going on to do a PhD.

Posted by Steve Cameron at 11:12 AM No comments:

Don't Get Around Much Anymore.

It's coming up on two years since I last visited family and friends in Australia. What a fabulous trip! Spent time with family and friends, visited my old stomping grounds, picked up some Australian albums which had been released while I'd been away, and the same with a few books. That trip really settled and recharged me.

I have no idea when I'll be able to visit again.

Recently, it has hit me quite hard that it may be a year or two - or even more. Technically I could travel now, if I wanted to go through the hassle of being on a plane, wearing a mask, surrounded by strangers and not receiving even the current low standards of food and drink, then going into quarantine at the other end and facing the prospect that here or there closes their borders and I'm unable to travel for extended periods. I would have to add two weeks to the trip, just to sit in a hotel in quarantine, and then possibly the same coming back here, but no-one seems sure of the rules in the UK, not even the government. But the biggest thing is the cost would be prohibitive.

I hadn't looked at airfares for nearly two years, but was stunned to see this morning they are currently four times what I usually pay. And then the two week quarantine at the other end apparently costs about the same as 1.5 times the usual airfare price. So a trip home which I normally get for around £900 would be closer to £5000. (As I said, I'm not even sure of the quarantine coming back into the UK - that could also add to the expense.)

So no, I can't travel at the moment. And I have no desire to sit on a plane for extended hours with strangers. Heck, I'm even cautious about going to the supermarket, and limit that unless I must.

But my mental health says I need to get out and do things, see people, interact beyond the monitor in front of me. I need to chat in person, be around others and have a laugh.

Good news is always appreciated, and I've had some this week which helped. Making plans with friends and family also helps, and I've taken time to do this during the week as well. And fine wine and eating never hurts. And yes, I've partaken this week - although I've been good and watched my intake on both counts.

It's draining, isn't it? And it made me think of all those people who applied for the one way trip to Mars, including 8 months or more with a bunch of other people in a tin can ship the size of a minibus. Yup, I wonder how many of them are going crazy after a year in an actual house.

Is NASA using this time to study the psychology of people in lockdown?

Posted by Steve Cameron at 5:54 PM No comments: