If You Give This Girl A Ride. 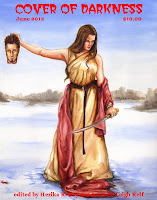 I've just realised that my story, If You Give This Girl A Ride, has been published in Cover of Darkness #11. It slipped in under the radar, as I wasn't expecting it to be released for quite some time yet.

The print version can be found here, and it should shortly be available in e-form, here.

Ironically, this story is set after another story in the sequence, Drive, She Said, which has been sold but is yet to be published. It shouldn't make any real difference, though. It is stand alone, and rather than If You Give This Girl A Ride being a sequel, Drive, She Said is now a prequel.

Labels: cover of darkness, drive she said, if you give this girl a ride, publishing, writing