When I Grew Up And Went To School... 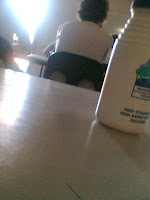 Motivation is a curious thing.  We say we want to do things, but make all the excuses as to why we can't. Of course I'm as guilty of this as the next person, but there are some who take it to new levels.

I see it often in my students - young adults who tell me of their hopes and dreams and plans for the future.  They tell me of how much they want to do these things.  Usually these plans require some kind of goal, a particular score on final exams in order to enter an establishment of further study and I always advise these students of how they can reach those goals.

But what I don't see anywhere near as often is the corresponding effort.

As with most things it's easier to talk about it than to actually do the work.

Once again I'd like to point out that this is something I'm guilty of also, although I'm definitely improving and writing more and more often. But unlike these guys I don't have an exam at the end of the year that gives me a result that sees whether I get into university or not. I don't have the sorts of goals that require a pass in English. And I already have a job.

It's easy to see things differently with experience and age, and we can never put old heads on young shoulders.  They are, after all, teenagers.  Also there's only so much I can do. I can't force them to learn and to work if they don't have the motivation.

But I do my job to the best of my ability, teach the course content well and pass on my sage advice and wisdom - along with the occasional kick up the backside when they need it.

And now and again students turn themselves around and actually surprises me.

Now those are the moments.
Posted by Steve Cameron at 6:58 AM