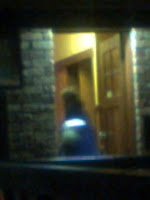 I used to tell people that I'd had two ghostly encounters over the years.  After another one last week, I counted up and realised there were actually five.

One of those previous encounters was actually two encounters.  Same location, just 12 hours apart. A mischievous little poltergeist  too. Actually made things move in front of my eyes (with other witnesses) and then the next morning, as well as playing with the lights, caused an object my colleague and I were looking for to disappear - only to make it re-appear when we weren't looking. Kind of freaky at the time, but a lot of fun too.

Another was a visitor I had one night.  I never saw anything, but I felt the presence, and I felt as though I was being held down. I just couldn't move or say anything - and it took an enormous effort and about 20 minutes to free myself.

Then last year I was standing next to someone who saw a ghost.  I didn't see anything, but I saw what it did to him - and there were plenty of internal clues surrounding the event to prove this as a true visitation.

And then last week I encountered number five.  I was on a school trip to Tasmania with 4 colleagues and 42 students, and we took in the tour of Port Arthur. (A wonderfully tragic place for a number of reasons - well worth the visit.  I love going there.)  The Isle of the Dead is fascinating, the Separate Prison is incredible, and the beauty (which masks the years of pain and suffering) is unsurpassed. During the daytime I visited the Parsonage, as I have previously.  This time, however, there was one room I felt rather uncomfortable in. I couldn't explain it, I just didn't like it in there. I am, however, wise enough to accept that perhaps there was nothing there but my own desire to see something.

At night we returned for the Ghost Tour - and if you've never done it, you must. Twice now I've enjoyed this tour - and both times I've been lucky enough to have excellent guides. This time, as we stood outside the Junior Medical Officer's House, around six of us heard the floorboards creak and the footsteps as something walked across the inside of the house.

A great tour, and I hope next time to encounter John Gould, The Lady in Blue or even the Parson.
Posted by Steve Cameron at 4:13 AM