Watch What You're Doing. 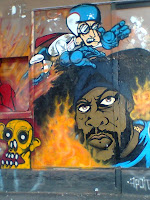 Tonight I'll be at Festival Hall in Melbourne to see The Pixies. For those that don't know this venue, it's a huge barn with less than ideal acoustics.

It has, however, come a long way. At least these days you can hear the music.

Back in the day, as my students like to call any period of time I refer to prior to their being born, it was a shocker - with a wall of sound hitting you from every direction as it bounced and reverberated around the boxing arena.

Over the years I've seen some great music there.  Johnny Winter, Dio, Stryper, Randy Stonehill, Joe Satriani to name only a few.  My last visit there was about 5 years ago to see Oasis. At least the Brothers Gallagher were still only barely talking to each other then.

But tonight it's The Pixies - not the best venue for them and I'm surprised by the choice of venue. But there is a sense of circle there for me. The first concert I can recall seeing at Festival Hall was Larry Norman, 'back in the day' - and as any Pixies fan will tell you, Come On Pilgrim, the band's first EP, was named after a Larry Norman line. In fact Frank Black turned up and jammed with Larry on that very song for one of his final shows before he passed.

I don't expect Frank to play Larry tonight - but I do anticipate a great show.
Posted by Steve Cameron at 1:38 AM