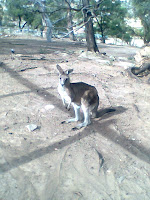 Today I visited an animal park with a bunch of students.

While kangaroos and wallabies and koalas and wombats and the like are nothing new to me, I was once again struck by how bizarre these marsupials are. I know that when Europeans first came to Australia, they were stunned by the diversity and uniqueness of Australian wildlife. In fact when they shipped back a platypus to their British colleagues, or so the legend goes, the scientists back in England thought they were having their collective legs pulled - after all, no creature as bizarre as this one could actually exist.

It's a mammal, but has a bill, lays eggs, has poisonous spikes on its hind legs and lives in and around waterways.  Robin Williams once did a hilarious routine based on these very facts.

But as bizarre as these animals are, I grew up with them. And even overseas visitors seeing them for the first time have seen pictures/read/heard about them.

There's not much out there that's truly weird in a 'not of this world' kind of way. Yes, I know we're still discovering strange creatures under the Antarctic or in the murky depths of the oceans, but for the truly unique, for that animal that causes a moment of complete shock where we are stunned something so bizarre could actually be alive, we'll have to wait for the xenobiologists to return from other planets.

For now I'll just have to rely on the Sci-Fi I read, and my own imagination in trying to create beings that aren't derivative. Lots of stories base themselves on variations of earth animals - insect people and the like.

I must say I've just enjoyed reading a couple of Robert J. Sawyer books where he explores the psychology of being alien. Now that's truly bizzare.

As for me?  Well, it's back to work.  I'm creating a planet populated by oversized wombats with tentacles.
Posted by Steve Cameron at 8:50 AM