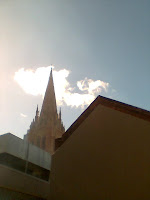 I can clearly remember the first time I really heard Deep Purple. I was a teenager and was camping with my friend, Johnny. We'd taken a bus up to Eildon and were staying in a tent. During the day we'd fly fish, and then at night we'd sit around the fire eating and listening to music on one of those radio/cassette players that started to slow down after a while when the batteries were going flat. Then we'd switch to the radio. We spent a lot of time listening to Blondie, The Police and Fleetwood Mac on that trip. I remember it well.

One evening we hung out with another fishermen we'd met during the day. We sat and talked and tied flies. And he was playing Made in Japan on his cassette player. That was the first time I really heard Deep Purple.

I remember being completely blown away.

I remember trading my Kiss album (Dynasty) for a copy of  Made in Japan a couple of weeks later at school.

I remembered all this last night at Festival Hall as I saw Deep Purple for the 7th time.

I haven't seen my school friend, Johnny, for almost 30 years now - but I went to this show with current friends, and they loved it as much as I did.  The band was tight - really tight. And they seemed to be having a wonderful time making music together.

I last saw them about two years ago, and then two years previous to that. And both times they were good, but not a patch on 84, 99 or 2001.  But last night. Wow! They were smoking, and sounded the best I've heard them in 10 years.

The concert was filled with middle aged people (mostly men) with a fair spattering of teens and kids. And as we walked out you could almost see parents saying to their kids, "See? Now THAT'S good music."

Deep Purple - five guys who can play the crap out of their instruments and sing like there's no tomorrow.  Ok, I have no doubt artists like Pink put on an entertainment extravaganza, but listen up, kids.  You want to hear music? Real music? Go camping, and bring along a copy of Made in Japan.

p.s. - Looks like James Hird was right all along.  Right?
Posted by Steve Cameron at 8:44 AM