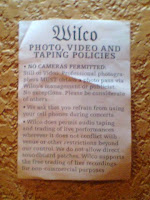 It must be difficult to follow in your father's footsteps and always face comparison with him. I followed my father into his line of work for a few years, and that was hard enough. But to be in the entertainment business and have the public spotlight on you all the time must surely be extremely difficult.

And what if you don't live up to that scrutiny - or expectation?

I didn't blog last Wednesday as I usually do, because I wasn't really at home for a few days.  I was at work, and then in the city for dinner, and then off to a Wilco concert, and home by 1 a.m. for a few hours sleep before I did the same thing all over again. And it was wonderful.

The support act was Liam Finn, and I was quite looking forward to him. Unfortunately I was very disappointed. I thought his songs were bland, lacking in melody, formulaic and filled with dull trite lyrics. I know a lot of people seem to like him, but he did nothing for me.  And then to make things worse he decided to bring out a "special guest" - sorry, Liam, but a friend of yours with the charisma of month old asparagus and the musical ability of the old deaf pet dog I had as a kid, does not really constitute a "special guest".

I later read up on this guy, and it seems like he has quite a following. Which I can't really understand.  Oh well, each their own - and we all have different tastes.....

And then Wilco exploded on stage - and tore the place apart. And from the first song to the last, over two and a half hours later, they gave all. Both nights were absolutely stunning. In hindsight, the first night seemed a little more sedate, as the audience and the band were a little flat - energy-wise. But on the second night they kicked it up a couple of gears and hit us with the knock-out punch.

I was standing in front of the stage at the first show, and then up behind and to the left of the mixing desk for the second. Right behind the VIP section. As usual, it was filled with lots of "VIPs" I didn't recognise. They also didn't seem all that interested in the concert. They certainly spent a lot of time talking to each other, hugging, texting, talking more, texting more, and trying to pick up. Later some of them decided to try and create a dance step for one of the songs.  They also made the heavy metal "wolf's head" symbol with their hands (at an Alt-Country concert), yelled out a lot, and texted still more. I've never seen so many i-Phones gathered in the one place. They were also the only ones that didn't sing along with the songs - probably because they've never heard them before.

I guess some of them might have been friends of the promoter, or whatever, but the others....

I must say I noticed an odd kind of yellow pus that welled from the pores of some of these VIPs. It  oozed down their bodies, then dripped from their noses, elbows and other extremities. I later tried to grab some of this stuff for analysis but it had gone - evaporated into the ether like ectoplasm.

It doesn't matter, though. I think I know what it was.  I suspect it was record company slime.

But you never know -  I might be wrong.
Posted by Steve Cameron at 8:45 AM