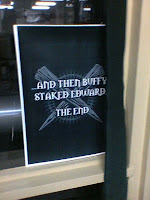 One of the things I'm really enjoying at the moment is reading local authors.

I've been paying attention to some of the small publishers here in Australia, and I'm discovering that not only is their production standard extremely high (layout, editing, artwork and so on) but they often publish writers that are either emerging (meaning I'll have a collector's item on my hands once they make it), or the offbeat and interesting stuff that major publishers don't have time for.

I love reading a local book and recognising places or situations, or some of those little in-jokes that only a native would understand.

My first real experience with this was when I bought a second-hand copy Striped Holes by Damien Broderick back in the early 90s while living in Tokyo. I'd never heard of him before, but it had a cool cover and was cheap in a land where imported books were very expensive.  Imagine my surprise when halfway through the book he mentioned Bourke Street, Melbourne, and some of the shops situated there. In fact, I seem to recall I was rather excited by it.

Do yourself a favour and check out Tasmaniac, MirrorDanse, Agog!, 12th Planet, CSFG, Ticonderoga, and all the others I can't think of at the moment.

Oh yeah, and my horoscope says I have good things happening this week.  It must be true, after all they wouldn't publish lies in a newspaper, would they?