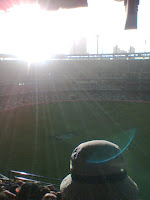 I was at the ANZAC day game and watched Essendon lose.  Badly.

For the longest time I've given Knights the benefit of the doubt, but no more.  It's time to go. And I'm not one of those that thinks Sheeds should still be there.  He was past his date at the club and should have left in 2001 or so.

We've supposedly been rebuilding the team for about 9 years now. C'mon - the pyramids were built quicker than that.  Although I suppose those ancient Egyptians didn't have a draft and a salary cap. (They did, however, have large whips.)

But Knights has had some success. He successfully ran McPhee, Lloyd and Lucas out of town, got rid of Lovett (which was acceptable as his off-game antics are more trouble than they are worth) and set about creating a game plan that is so cunning it doesn't actually have a plan.

To me, and many other fans waiting patiently, the plan appears to consist of... wait for it ...  (should we have a drumroll?) ... here it is ... "kick as many goals as you can and don't bother about defending because then we'll be so far ahead they'll never catch up."  Wow! Pure genius!

Except for one small point.  We don't kick many goals, and in fact were goal-less at quarter time last Sunday. And then went on to lose by 65 points.

I have another cunning plan.

Let's get rid of Matthew (it's not so much a plan, as a 'vibe') Knights, and bring in someone who actually  has a plan.
Posted by Steve Cameron at 7:42 AM