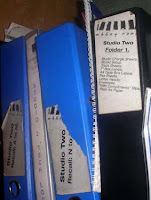 To say The Beatles broke up because of Yoko Ono is a little simplistic.

From all I've seen and read egos seem to be to blame.  Paul became leader because Brian had gone, and the others resented that. John didn't want Paul to be leader - but couldn't work up the effort to actually do anything himself. George was tired of being treated like the kid brother. Ringo, of course, was Ringo.  If The Beatles had stayed together, he'd have still been there drumming.

And Yoko was there, gazing up at rebellious John.

But as a relative of mine recently said to me, they should have just worked through it and continued making music.  The sum was always greater than the parts. He then echoed Larry Norman, who sang:

The Beatles said, "All You Need is Love"
and then they broke up.

Who knows where their music would have headed if they'd stayed together.

We'd certainly have had the best songs from their respective solo albums (plus ones we don't know, as their lives would have led different paths and the experiences would have changed.) Of course, there's always the chance they would have been terrible. (Think later Rolling Stones).

As the character said at the end of Fanboys, as he's about to see The Phantom Menace after a 15 year wait, "What if it's crap?"

But at least John and Paul were always each other's filters.  And John would have told Paul that Bip Bop was just plain silly, while Paul would have toned down some of John's more scathing attacks. (As well as (hopefully)  preventing Yoko from appearing with her own songs. We're all Water????  Ugh!)

But what's done is done, and the past cannot be changed.

At least we still have Please Please Me to Let It Be, and all the stuff making the rounds for collectors.

But somewhere, in another universe, Paul, John, George and Ringo are getting on stage to belt out some old and new tunes.