Success, But Not For Me. 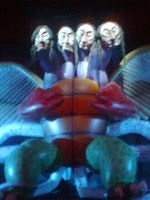 I belong to a casual collective of writers who occasionally meet up and talk about writing. (and the weather, and music, and film, and politics...)

One of these writers has recently had some success as they've sold a few short stories. And good luck to them, congratulations and so on.  I'm really pleased for them - they deserve their success.

(Yes, I know 'they' is for more than one person, but I'm trying to keep this genderless.)

But what I don't like is how this person thinks they are now Stephen King. They think they've finally made it.  They keep talking about how they've only taken the first step, but their comments and attitude suggests otherwise.

Now this is a person I actually quite like, but recently I've tried to avoid them. They tell me about how I can have success too by writing a particular way, to hang in there, and to just do what they did.  And to make it worse they're telling everyone that they're a professional writer.  Even seeking (and giving out) tax advice on making claims and deductions for writing.  All on the basis of a sale of two stories.  Hmmm, I spoke to my taxation friend who advised me that the Tax Office is not happy with 'hobby' claims unless you're earning substantial revenue - over $5,000 or so.  I don't know who their advisor is, but I'd tread carefully.

I know in this person's heart they're just being encouraging and supportive, but since they are lording it up so much and in everyone's face, it's coming across as superior and condescending.  I thought about pulling them aside and having a quick chat about it, but I'm not that close to this person and there are better people to do it. And then someone else did speak to them about it.  And was told they were just jealous and bitter.

Hey, if you're going to have success, remember you might need to use those same rungs later on the way down the ladder.
Posted by Steve Cameron at 11:16 PM