It Comes Back To Bite Ya. 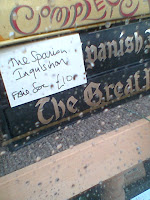 I’ve been a bit confused recently. I had thought my life and its surrounds were back in balance, and that all was well with the world.

You see, I’m a great believer in karma. I don’t necessarily mean some kind of mystical energy thing, but certainly I think that people reap what they sow. Do unto others and all that. Treat someone badly, and at some point it will come back to haunt you. Or, as a friend puts it, “Be careful how you deal with others. It’ll always come back to bite ya on the bum.”

Recently, someone was particularly nasty and vengeful to me, and it impacted on me. They were rather manipulative, underhanded, dishonest and it hurt me. I wasn’t happy, but I wasn’t going to lower myself to their standard, so I let it go.

And then I heard that someone else had done the same thing to this person. I won’t say I was happy about it, as I don’t like to see anyone being like that, but there was a certain amount of satisfaction that karma was still operating.

But then only a few days later I learned that this person came out on top. And it really annoyed me. What happened to karma? Justice? Where’s the lesson for those that were looking on?

When students complain to me about other students getting away with something, I always remind them that they were lucky this once, but if it’s regular behaviour they’ll get caught out at some point.

With this person I’m starting to hear it’s regular behaviour. And so I must say I have my hopes up. At some point I feel it will all come a cropper for this person. If you act like that, it’ll catch up with you. We never expect it, but we always should.

Which means somewhere along the line something will happen to this person. Or maybe they’ll reincarnate as something lowly – maybe a gnat, or a member of a boyband.
Posted by Steve Cameron at 5:22 PM