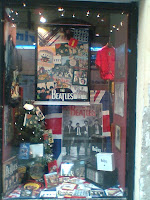 The only thing I knew before I went into the pub last night was the name of the band, Rubber Soul. Yet just before they started playing I told my companion that they would open with ‘I Saw Her Standing There.’ OK, with a name like that there was a fair chance they would play Beatles stuff, but to be absolutely sure of which song they would open with is pretty impressive. How did I know it? I have no idea, just another mystery in this universe.

Of course it got me thinking about the fabs, and particularly John’s death. The anniversary was just a few weeks ago.

I could have sworn it was a Friday, but I’ve just checked online and it can’t have been. It was an evening, and I was working my part time job at a local supermarket. I think school had finished for the year, but I was working and still had several hours to spend in the deep freeze and dairy case. Another schoolboy came in, someone we worked with, someone who was always a bit of a smart-alec, and told us that John Lennon was dead.

He said it with a grin, in that schoolboy kind of way, and I didn’t believe him. I figured he knew about my Beatles infatuation and that he was having a laugh. A bit later, when someone else mentioned it, I presumed it was a publicity stunt. After all, John had just released his first album in over five years and he probably needed all the advertising and publicity he could get. I thought I’d get home and find out it was all OK, a mistake or a hoax, and that John would be on TV making some quip about how he was very much alive.

Of course, as we all know, he wasn’t.

Others went of to early morning vigils in the city centre, my friend and I talked about wearing black armbands to school – but didn’t get around to finding any black material. So the two of us sat around and played Beatle and Lennon albums till late. And we talked.

Something similar happened a few years later when George passed away. In some ways that one was more upsetting. George always seemed like the nicest, the most down to earth, the most honest of the four lads.

And then there were two.

I’ve previously written about how Paul’s music no longer interests me, and Ringo hasn’t had a decent album since the early 70s. Drag out the remastered Beatles, throw on some early 70s solo stuff (be choosy) and crank them up. If you’re looking for new music, go and pick up a Wilco album instead.

And have a wonderful Christmas.
Posted by Steve Cameron at 10:21 AM