It Was A Splendid Summer Morning... 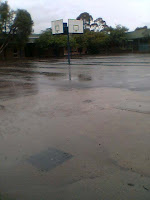 So summertime is here, and school is seriously winding down.  For those in the northern hemisphere, this is the end of the academic year down under, and we're about to head into our long break.

We've just started our summer program - eight days of non-academic activities for the kids.  They go and see a film, some rock climbing, rollerblading and so on.  And for those that don't wish to spend money we have in school activities like quizzes and crafts.

When I was a kid we loved the summer program.  Even just watching a film was great. The school would rent a movie projector and we'd watch real film - even if it was some piece of crap like No Blade Of Grass, we loved it because it was real film. Video didn't exist in those days, and movies were a treat.  So attendance at summer program in those days was extremely high.

These days it's extremely low. Many of the kids have stopped coming anyway because the reports are written and 'it doesn't matter anymore', (the words of the kids and their parents, not ours) and the program just doesn't excite them.  It's hard to compete with their WIIs, DVDs, PCs and whatever else they choose to do at home.

So yesterday, when we went rollerblading, there were very few kids there.  But the ones that went had a wonderful time, and then afterwards, myself and another teacher cooked a barbecue lunch for them. We were then meant to go to a park and kick back for a while, but since it was raining heavily (check out the pic and yes, this is the beginning of our summer!) we had to quickly find an alternate activity.

Only a couple more days and I'll be off to Europe.  My bags are packed, my housesitters are briefed, my in-laws are excited, the plans are made and I'm more than ready for a break. Hopefully I'll be able to get near a PC next week to keep these posts going.

See you in Italy.
Posted by Steve Cameron at 9:08 AM