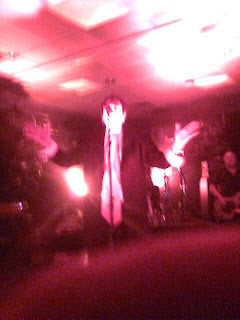 Imagine you're standing about a metre directly in front of Doc Neeson and listening to the reunited Angels. Does life get any better?

I first saw them about a year ago, despite having been a huge fan since the late 70s, but this time they sounded even better.  The set list was fantastic and Doc looked a heck of a lot healthier and more animated than then.  Doc was in a bad car accident a few years ago, and obviously has health issues, but on Thursday night he gave it all and rocked us all.

There were two support acts - the first was a bunch of local lads that had lots of energy but weren't particularly original.  I can see that they might go somewhere in the future with a couple of changes to their line-up.  The other support band, from Sydney, was Stone Parade - which sounds like it should have been a Doors song. They had some great moments, and I think elsewhere I might have enjoyed them. Unfortunately one of the guitarists had his amp turned up way too loud, and being in the front row that was all I could hear. Whenever he played any chords all I could hear was a chainsaw sound that just distorted dreadfully. My ears rang the next day or two - not from The Angels, but from these guys.

A shame, really. I wanted to like them a lot more, but they were just unlistenable due to Captain Volume's extreme loudness.

Overall, an amazing evening.  The Angels ruled, the beer was good and the friends I was with were great.  Shame about the support acts, and the drunken idiots who decided that pushing people and spilling drinks on them is acceptable behaviour at a gig.
Posted by Steve Cameron at 5:01 AM