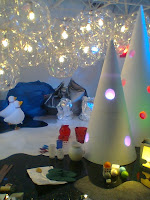 I don't know the chap upstairs - I've never met him at all, but he has excellent taste in books.

I'm currently in Scotland, staying with a friend in Glasgow, and when I was going out today I noticed a few bags of recyclables and a bag of books - and lying on the top was a biography of Bill Hicks. Now this is a book I've seen before and wanted to read, so my friend knocked on the neighbour's door and asked whether the books were being thrown out. He very kindly told me to take whatever I wanted, so then I was free to dive down into the stack and have a real look.

If these books had been in Australia, and I didn't have to fly them home, I would probably have grabbed most of them.  Even though I have to watch the weight of my luggage, there were three or four books there that I've been looking for and decided to take.  And so now I have reading material for my trip.

I arrived in Scotland late last night - in quite heavy snow and bad weather. Much of Europe is under snow with many airports closed so we were lucky to still have a flight from Munich. Even driving from Edinburgh to Glasgow last night was very slow going.  There was a lot of ice on the road, lots of tailbacks, slow moving traffic and many people we felt sorry for stuck in jams behind jack-knifed semis. And there were several of these. Almost midnight on a cold and wet night you just want to get home, not sitting in a car behind other cars for hours at a time.

I don't know whether it's psychological, or some kind of weird collective unconsciousness, but I always feel at home here. I was born in Scotland and I emigrated to Australia as a young child, so coming to Scotland is a homecoming of sorts. I feel something heartwarming as soon as I land.

Today I wandered around town in the snow, just breathing in the atmosphere and soaking up the country. And the haggis, neeps and tatties and beer at lunch was amazing.

If you've never tried haggis, then you don't know what you're missing out on. Yum.
Posted by Steve Cameron at 5:19 PM