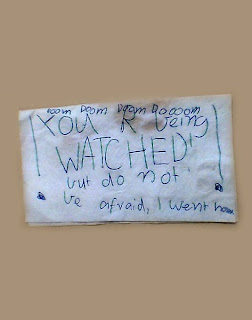 While most parents think their kids are going to become handfuls when they become teenagers, and for some reason this seems especially true of girls, my niece (let's call her Anne)  really is going to be a handful. She thinks incredibly differently to everyone else I know, has an amazingly strange Gilliam-like imagination and non-sequiturs in the most wonderfully bizarre ways.

Yesterday I was at McDonalds for breakfast - a place I really try not to frequent - but it was another niece's birthday and she was there with her parents and I had to drop off the present and . . . .  well, you get the picture.  And Anne was there too.

While we were eating, Anne was busy writing on a napkin.

"What's that you're writing?" we asked.
"Just something to scare the next people to use this table," she replied. "I'm going to leave it here, and when they see it they'll be scared."
What are the Dooms at the top about, I wondered - especially since I wasn't sure how a 7 year old would even know the usage of said word. She then sang the opening notes of Beethoven's 5th Symphony, using the Dooms.... I loved the genius irony of not only the music, but the message of doom. (Even though I know she didn't intend it.)

This is the same girl who then read out a speech she'd just written - the one she'd prepared for her "sugar self help group." (Yes, I know. Where on earth did that come from?) It started with:

"Hello, my name is Anne." Then she'd written, in brackets "Hello Anne" - the supposed response from the other members of this group.  At that point I recalled when she was about 4 and someone asked her what she wanted to be when she grew up. She simply said, "An alcoholic."

And there are a million more stories like these ones. This is a girl who thinks outside every box, and yesterday over breakfast was deliberately trying to work out how to scare whichever strangers were to next sit at our table. And that's a little weird - especially since she wanted to do it by telling them not to be afraid - she said to me that would make them more scared.

I sure hope she starts writing fiction when she's older.  I'll point her straight at the Australian Horror Writer's Association. Perhaps she'll even get published in Midnight Echo before I do.
Posted by Steve Cameron at 5:51 AM