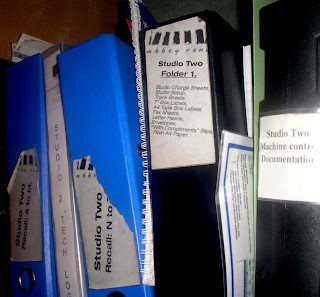 As you may recall, I was lucky enough to find myself inside Abbey Road studios a couple of years ago. When I first entered the holy place and was waiting at the reception counter, I stood next to some guy who was opening a stack of envelopes and checking the mail. What made this ultra cool, though, was the letters were all addressed to Sir George Martin. To me it was a moment of surrealism, a moment when I felt connected personally to the Fabs. I mean, here I was standing next to the guy who opened mail for the guy who produced The Beatles.

With my wife and our host, I toured all three studios guided by the studio manager. She was able to share lots about the studios, both technically and historically, but I more than held my own when it came to geekdom and useless trivia.  At one point she pointed to some pictures on the wall, and identified the artists. The Goons, Cilla Black, Sir Malcolm Sargent. (All of which I knew.) There was, however, one group that she didn't know.  I was able to identify them, though.  At another point she told me she wasn't sure whether The Beatles had ever used Studio 3. I was able to state which songs were recorded there, and then had a similar conversation in Studio 1.

There is very little in the way of storage available at the studios, so the hallways are lined with instruments. As we passed a couple of pianos and an organ, the manager just tapped them and said "Lady Madonna, Billy Preston, A Day in the Life.  Would you like to play any of these?"

I don't think I drooled though I may have gasped audibly.  I did, however, have enough presence of mind to grab the opportunity to play a couple of chords on the Lady Madonna piano.  And it had that sound. You could instantly recognise the tones.

As we were leaving, I asked my wife what the date was. She replied it was the 4th of January. "Wow", I said. "Thirty-seven years ago today the Beatles had their last ever session here. George played the guitar overdubs to Let It Be." At this point our host said, "You need to get a life!  Ride a bike, or something." And grinned. I guess he was kind of impressed, in the same way people are 'kind of' impressed by road accidents.

Let It Be was released in two versions. The single with the softer guitar solo, and the album track with the overdubbed 'angry' solo.  I believe there were plans at one stage to release the song with the two solos on different channels, but it never eventuated.

But last week, as I started teaching myself the 'angry' solo, I recalled the afternoon I spent in the studio. A bunch of kids at school, the keyboard ensemble,  have chosen to play Let It Be at a concert. And their music teacher has asked me to accompany them on stage. It didn't take long to figure out - but I want to nail the thing so I get it right on the night.

OK, it's not Woodstock, but it's a gig.  And I know I'll have fun.  I only hope I do credit to George Harrison.
Posted by Steve Cameron at 12:15 AM

Labels: A Day In The Life, Abbey Road, Billy Preston, George Martin, Lady Madonna, Let It Be, The Beatles