So Many Books, So Little Time. 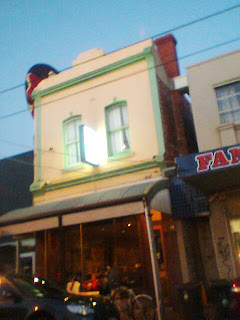 Although I read continuously, even by my standards I seem to have raced through quite a few books over the past few weeks. And, I must say I'm very happy to report, some of the books I've enjoyed most have been Australian.

The Canberra Speculative Fiction Guild has quietly produced a number of quality anthologies over the past few years. I picked up a couple at Continuum 5 earlier this year, and have generally enjoyed the stories. Nor of Human had some moments, although the quality of story and writing varied greatly. Machinations, edited by Chris Andrews, however, was much stronger as a collection. I'm looking forward to reading the others.

I was fortunate enough to meet Narrelle M. Harris earlier this year. She was on a couple of panels at Continuum 5, where she was articulate and very funny. And now I'm able to report her writing suitably reflects this witty personality. The Opposite of Life is an entertaining vampire story set in Melbourne, my hometown.  Despite guessing the ending twist about a third of the way through, I thoroughly enjoyed the tale.  Very, very funny at times (Vampires who have never learned to drive twiddling their thumbs while seated on a tram as they chase someone across the city ) and an entertaining story to boot. Do I get bonus marks for recognising Stalactites? Also recommended.

And by the way, Narrelle - for later editions, the nightclubs are in the west end of Melbourne, not the east. I guess the editor missed that one.

I finished reading Writers of the Future Vol. 25, which means I've now read every winning story except for one. (The Two Tzaddicks by Ira Herman was not included in Vol. 1 as it had previously been published elsewhere) Vol. 25 had some excellent stories, although I didn't feel the standard was quite as high as it has been recently. Make sure you check out Garden of Tiang Zi by Emery Huang, After The Final Sunset, Again by Jordan Lapp and Risqueman by Mike Wood.

At the same time I'm still drifting in and out of Pulp Fiction: The Dames, an omnibus of 1930s detective and gangster stories.  An interesting read of a popular genre from another era. Between other books I'll pick this up for a few stories. Lots of fun to read, and some great dialogue that has since become cliched.

The cream of the crop, however, is Worldshaker by Richard Harland. An alternate history with elements of steampunk woven throughout. What a stunning and clever book! I was at a book launch for this novel a few months ago, and was thoroughly impressed by Richard's energetic reading, as well as his exuberance at having the book released. Last week I finally got around to reading it, and couldn't put it down. I laughed out loud in parts - especially the chapter when Col attends school for the first time. But the richness of the world and the depths of ideas ensnared me.  I've heard there are plans for another book in the 'series'.  I sure hope so. And the great news is that Worldshaker has sold to the US and the UK.  Congratulations, Richard. VERY highly recommended.

Oh, and just another quick one.  I've only read the first story from this dark collection (and that one seemed even darker because it's set around the train line and suburbs I live in), but it needs to be publicised.  Australian author Paul Haines' collection, A Slice Of Life.  The entire cover price goes towards Paul's fight against cancer.  Worthy cause indeed.

So if you haven't read any of these books, what's stopping you?  Read!
Posted by Steve Cameron at 2:21 AM