A Whale Of Doubt. 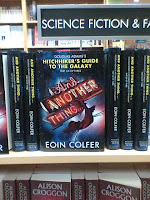 I must not be reading the right magazines or web pages or whatever.  I had absolutely no idea that another Hitchhikers Guide to the Galaxy book was on its way.

Mind you, I was equally clueless about the publication of The Last Chronicles of Thomas Covenant, until I saw a copy on a friend's shelf. And it was only by accident I discovered the existence of the new Red Dwarf a few days after it aired in the UK. (And don't we wish they'd held out for a bigger budget, a better story and more rewrites!)

So this afternoon, when my wife and I wandered down to the NOVA in Lygon Street to see Moon, and An Education, I was rather surprised to see a new HHGG book on the shelf in the bookstore next door. Written by Eoin Colfer, it's authorised by Adams's widow. Adams apparently said he planned to write a sixth book in the series, as he felt the last one ended on too much of a downer - but I was under the impression that his unpublished intentions for book six had already been released as Salmon of Doubt. While part of me is thrilled at the prospect of more Hitchhiker's to read, another part of me is quite distrustful of stories carried on by other writers. I did, however, enjoy Starship Titanic, written by Monty Python's Terry Jones (apparently in the nude), but Douglas Adams was around for that one and had some input into the book. There's a very fine line between fan fiction and posthumous authorisations. I'm rather glad they don't do this with music. Can you imagine a new Beatles' album - for example, Sgt. Pepper. 2: More help from my friends - written and recorded by four other guys and authorised by Yoko Ono?

I met Douglas Adams once.  He was in town to promote his enviro-book, Last Chance to See, and was sitting at a table in the middle of a bookstore. Having been totally under-promoted, it was reminiscent of the album signing scene in Spinal Tap. When I arrived, the only other people present were two teenage boys. Neither would have been out of place as extras on Big Bang Theory. They just stood to one side and grinned a lot, basking in his presence, not even brave enough to speak to him. Douglas sat and smoked, happily chatting to me for quite a while - about Melbourne, about writing, about music, about stuff, and very kindly signed some books for me. Sadly, not one other person approached the table or even seemed to wonder who he was or why he was sitting there. A few months later I met Patrick Tilley in the same place, under similar circumstances. Again the only promotion was an A4 piece of paper taped to the interior wall of the store.

Predictably, that bookstore didn't last long.  I guess no one knew it was there.

But HHGG is still alive, and I reserve judgement on whether that's a good thing or not. I will, of course, purchase a copy once it's in paperback. And then I'll decide whether I would like to see a seventh one or not.
Posted by Steve Cameron at 6:52 AM