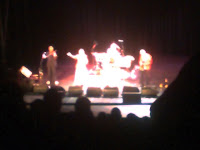 What a fantastic evening! Dinner with my friend was enjoyable, I bumped into another old friend I haven't seen for five years but have been meaning to catch up with, Gibb Todd impressed and then Steeleye Span was superb. We partied like it's 1399.

This is their 40th anniversary tour, and yet Maddy Prior's voice sounds as pure as ever, Ken Nicol has slotted into the band very well (Last time I saw them, I admit I wasn't convinced) Liam Genockey had a nicely underplayed feel on drums, Peter Knight was as amazing as ever, and Pete Zorn, who is filling in for the unwell Rick Kemp, had a beautifully gentle touch on bass.

They played a lot of songs that I wasn't too familiar with, mostly from the past 15 years - an era from which I haven't listened to all their CDs.  They did, however, play Thomas the Rhymer and The Blacksmith from the earlier days, and then finished with an encore of All Around My Hat (introduced as "our anthem"), and Hard Times of Old England.

There were two standout tracks for me. I Live Not Where I Love, and Betsy Bell and Mary Gray.  Both were virtually acoustic, one with guitar and the other with violin. And both were completely amazing.

Maddy did her little Maddy dances, those little slightly Scottish steps she usually does, Pete, wearing what appeared to be a cardigan, looked as though he was ready to put on his slippers and have a cocoa, and Ken took every opportunity to remind us who won the recent cricket series. My friend was a little disappointed they didn't sing Gaudete as an encore, and I wanted them to do anything from Commoner's Crown.

But it was still a fantastic show, and I can't wait until their 45th Anniversary shows.
Posted by Steve Cameron at 4:46 AM