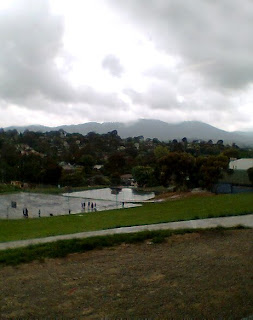 I had a strange experience today - a sudden memory of being about 13 years old again and stuck in a boring class in school.  It was more than just deja-vu, it was like some twisted Vietnam flashback on acid.

OK, that's a major exaggeration, but it was kind of weird - and vivid.

I've previously mentioned that I teach in the school where I was a student.  This morning I took an extra class for an absent teacher, a Year 8 history class where they were studying the black plague. They were a great bunch of kids and worked really well all class.

As I entered the room, I looked out the classroom windows at the vista pictured above. Today is cloudy and wet and the beautiful mountain range which sprawls across the eastern horizon was mostly hidden by cloud. And so I suddenly remembered walking into the same room for a geography lesson in 1976, on a day with similar weather conditions. I remember the class was about Mongolia - the rainfall, the topography, the produce and whatever. But apart from the name of the Mongolian capital I remember none of the other facts or figures from that class. And the only reason I recall Ulan Bator, is because my friends and I thought it sounded very funny and said it about 20 times a day over the next few weeks. Well, it seemed funnier at the time than it does now. I guess you had to be there, and be a 13 year old boy. (Ironically a Mongolian fact has risen again. A group of friends and I currently have a similar joke regarding the Togrog, the currency of Mongolia. Maybe you don't have to be 13.)

What I do remember from that class, though, is being amazed at how different the landscape looked with Mt. Dandenong having disappeared behind clouds forcing a closer horizon, and watching a dog that spent most of the 40 minutes running around the playing fields while I was supposed to be working.

Memories like this are important to me. They remind me what it is like to be bored in class, and serve as motivation for keeping my teaching varied and interesting. And the same with my writing.  I'll read almost anything to the conclusion, even stories I don't think are written particularly well and try to learn from them to improve my own writing. (It goes without saying that I also learn from the stories I love.)

And so I write the type of story I love to read.  I know they're good and worth reading - if only I could convince editors my writing is worth purchasing
Posted by Steve Cameron at 12:29 AM