To Sleep, Perchance To Sleep. 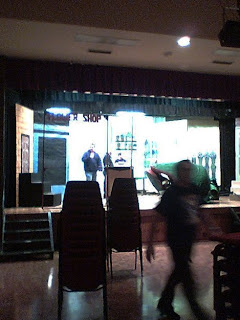 The Little Shop of Horrors has finished its week-long run. We did the final show, made the speeches and presentations, got rid of the cast and bumped out. The kids were all buzzing like they'd had nothing but caffeine drinks for a week - hmmm, now I think of it that's all I saw them drinking around the backstage area.

We waved goodbye to the last of the sets as they were loaded into a trailer and slowly disappeared into the darkness over the car park speed bumps - in stark contrast to the driver we saw the night before who bounced over the speed bumps while still accelerating. After thanking the staff at the community centre, the crew (or at least whoever was left standing) headed off to the director's house for a 'debrief'.

Although we were all worn out, we managed a few drinks, a bit of music, a lot of laughs and some verbal abuse - 'Shut Up' and 'Clown' seemed really funny at the time, believe me. I crawled into bed at 4.am.

Last night, though, I slept for almost 12 hours - and I feel much better for it.

Thanks guys - we put on a great show and had a great time. Now, which musical are we going to present next time?
Posted by Steve Cameron at 2:09 AM