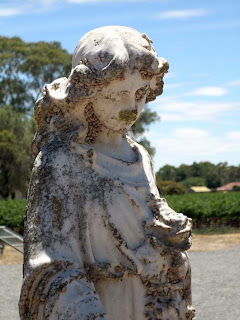 My wife and I had dinner with a close friend last night. He was, as always, a wonderful host. Not only did he prepare a delicious lamb dinner and kept our wine topped up (very important), but he planned an evening of DVD entertainment as well.

We held our regular discussion on football and the current state of the AFL. This basically consisted of us both agreeing that Hardwick was a good choice of coach for Richmond and that the umpiring in the Essendon - Hawthorn game was extremely poor. We then returned to our oft repeated attempts to understand the wacky and zany plans Andrew Demetriou dreams up for our beloved game while hiding under his desk. Like adding new teams to an already crowded league (and thereby diluting our talent more), increasing the finals to include the top 10 teams (thereby rewarding mediocrity), ignoring the tanking that occurs (thereby being the only person in the country that can't see it happening), and pushing for a fixture that is only set until round 17, with games after that to be based on ladder positions. Yeah, that guy is really in touch with what the fans want.

Then we went through to the living room to watch an old Hammer vampire film.

My friend is a film buff. He especially loves his old horror films. At one point in the evening our topic of conversation turned to horror. Recently, I wrote a ghost story which my friend has read. I told him I was considering submitting it to a horror market. He seemed surprised by this as he hadn't considered it to be a 'horror' story. And I suppose by certain definitions of horror, it probably isn't.

I tried to ask someone in the writing world if it was a horror story, and they told me that if it contained ghosts then it's dark fantasy. Is that right? It's not particularly scary, but it does have death, it has a ghost and it has a haunting. It's a gentle ghost story.

Is it horror? Would a horror market accept it? I'll send it off and we'll see what happens. If it sells, then I guess it is. I'll keep you informed.

In the meantime keep an eye on what Demetriou attempts to do to football. That's a real horror story.
Posted by Steve Cameron at 10:34 AM