And Now, Here They Are, The Beatles! 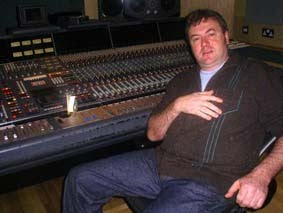 Only two weeks until the remastered Beatles CDs become available.

As a Beatle freak, (Yep, that's me sitting at the console in Studio 2 at Abbey Road) this is something I've waited a very long time for. The 1987 releases were awful - muddy, compressed and quite unlistenable. And, for some reason that's still unclear, the first four albums were only released in mono. At the time EMI made some excuse about how that's how they were released originally, but it didn't take much research to discover those discs were also released on stereo vinyl.

About 15 years ago in Tokyo, the good Doctor and I obtained CDs containing mono transfers of the White Album. I still recall the first time I heard those. Wow! Not only was the mix amazing, but the clarity and presence blew my mind. Sgt. Pepper was much the same. Of course George Martin and crew spent almost three weeks mixing the mono Pepper, and about two and a half days with the stereo mix.

Over the past few years, my official Beatles CDs have been relegated to the back cupboard while I've listened to Dr. Ebbett's vinyl transfers. Superior in every way.

While the Rolling Stones have continually updated and repackaged their discs (although I still prefer the Mickboy transfers), the Beatles have waited a long time to do this. And from all I've read, it looks like it has been done properly.

The Doctor is the coolest Beatles fan I know. He knows what's what, and we have incredibly similar tastes and interests. I only wish he lived closer so we could have a listening party together on the release date.
Posted by Steve Cameron at 7:45 AM