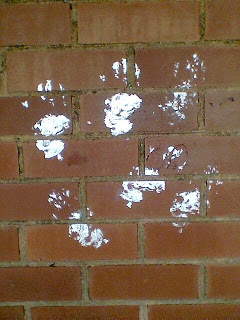 On the weekend, while travelling to Continuum, I spent some time looking at the ubiquitous tagging and graffiti that covers the train routes from and to the city. I searched for some piece of writing that was witty, intelligent or at least mildly amusing. Mostly I saw illegible scrawls, tags in letters 5 feet high but barely readable. Scribbles on top, and often another layer over that. And it's all about 'me'. My name, my tag, my identity.

I remember the same trip 25 to 30 years ago. Not as much graffiti, but what there was often included a good dose of social commentary. Or at least a laugh.

The famous (or infamous) "Real Punks Can't Spell Cappuccino" has led to a number of imitators and varying claims of origin. I don't know if the Melbourne one was the first, but it was the one that I saw and laughed at. Years later I read a column by Mike Gibson where he wrote of a punk he'd seen with braces in her mouth, and how the reality didn't match the rebellious image.

"Yum, Yum, Worms for Tea" was a surreal moment for many years. I never quite understood it, I just enjoyed it.

But perhaps my favourite was the deliciously unintentional truth of the mis-punctuated "I'ts Only Rock 'N' Roll".

And that was exactly what Rock 'N' Roll was about before bands like Air Supply defanged it.
Posted by Steve Cameron at 3:46 AM