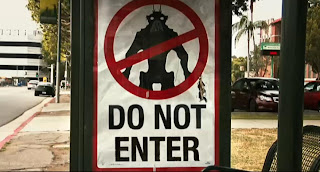 I went to see District 9 on the weekend. I love a great science fiction film, and it's been a very very long time between drinks. Unfortunately this was one of the worst I've ever seen.

Not only was the plot full of holes, but there were storylines that didn't make sense, unbelievably stereotypical characters and an extreme overuse of hand-held cameras. Even the non-action scenes bobbed from side to sea-sick side. By the end of the film I actually felt a little nauseous.

It was presented as though it was a documentary, but that pretense fell apart when they included scenes of aliens conspiring in private. There was a protagonist I longed for the aliens to kill (slowly and painfully), supposedly intelligent aliens who could travel interstellar distances but couldn't organise their own homes or do much more than scamper through dumps (I felt no sympathy for their plight at all), and, unbelievably, alien 'petrol' that supposedly turned humans into fully biological aliens. Yeah, right. Move out of the 40s, guys.

And then, to top it all off, two thirds of the way through the film suddenly turned into Transformers.

So many unanswered questions - none of which made you think, just made you believe the production team was working from an early draft of an unfinished script.

I loved the idea, I hated the execution. Setting it in South Africa was extremely obvious but I could have coped with that if the supposed themes and messages (racism and apartheid) hadn't been shoved down our throats so forcibly by the director.

Give it a miss. As the sign says, Do Not Enter!
Posted by Steve Cameron at 1:28 AM