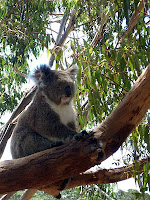 Jobe Watson won the Brownlow Medal this week. For those who don't follow Australian Rules Football, this is an award given yearly for the 'best and fairest' player in the league - the MVP, if you like. It's voted for by the umpiring team after each game (3,2,1 points) and players who have been suspended throughout the year are automatically disqualified.

Jobe plays for my team, the Essendon Bombers. He just happens to be the son of a fantastic player, Tim Watson, who played for Essendon in the 80s. So Jobe won the award. But of course he's a champion. He was always going to be a champion, wasn't he? His father was a champion, he was raised in that supportive football environment, he had the genes, he grew up around the club.

Kevin Sheedy, the previous coach, recently revealed that if he'd stayed at the club he'd have either traded or de-listed Jobe. You see, Jobe was simply sailing along, not working anywhere near his potential and not taking the game seriously enough to succeed at that level.

Jobe revealed this week that it was his father, Tim, who took him aside a few years ago and had a chat with him. It was OK if he didn't want to play AFL, but if he was going to play then he needed to be make an effort. Jobe says he was angry with his father, and didn't speak to him for a few days. But then he took the words to heart and now he's become the player on which legends are built.

It's time for me to become more serious in my writing.

I don't know how far I can take it. I'm not even sure I know where I'd like it to go, but I know I have some short term goals that I want to achieve, and in order to do so I need to take my plan to the next level.
I'm feeling optimistic about my writing at the moment. I'm productive, I'm seeing improvement and getting great feedback.

What are your goals? What are you doing to achieve them?
Posted by Steve Cameron at 3:29 AM