A Professional Geek From Melbourne. 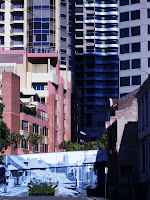 In 2011 I contacted the Continuum people and offered to run a panel on my favourite SF writer, Philip K. Dick. I automatically invited Bruce Gillespie (editor of the fabulous The Electric Shepherd) to join me, then sat back to see what happened.

Someone with a strange name was then allocated the panel, then had to withdraw, and then another (with a more 'normal' name) was assigned. I think we may have emailed a little beforehand, but I do recall the night before the panel when David McDonald introduced himself to me. He asked me how the panel was to run, and I briefly explained very little (as it was all PowerPoint based and quite logical in order).

The next day Bruce, David and I ran a very successful and interesting PKD session. Bruce, of course, was wonderful as always. But I owe much of that success to the insights and thoughts of David.  Afterwards we chatted, and it turned out we not only had some same acquaintances in the 'real world, but had similar backgrounds with matching reference points. So I sat in on a Dr. Who panel he'd organised, a wonderfully emotive Sarah Jane tribute, and found that he had a similar approach and attention to quality and detail that I had.

Afterwards, David bought me a coffee, and I impressed him with my...  well, everything.

Over the past year or so, David and I have become firm friends. We've become crit buddies, shared good news and bad, and built a mutual respect for each other's work and approach to writing. We have similar philosophies, morals and ethics.

Oh, and he'll always remind me of the crit session I conducted on Cold Comfort (from Epilogue) at Conflux mere hours before the submission deadline. You see, he was plying me with drinks and one thing led to another... But that's a story for future panels when we are both deservedly recognised for our abilities and writing credentials.

David is an up-and-coming writer whose work deserves attention. He's a great guy, a good friend and a fabulous writer. He was deservedly nominated for the "William Atheling Jr Award for Criticism or Review" (along with Tansy Rayner Roberts and Tehani Wessely) for the “Reviewing New Who” series. And I'm proud to share the Epilogue TOC with him. Check him out here.

And don't believe a word he says about Canberra. What happened at Conflux, stayed at Conflux.
Posted by Steve Cameron at 8:34 AM

Seriously, though, right back at you - you're a great friend and a better writer than me.