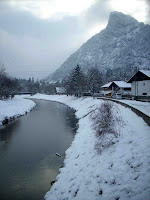 After spending thirteen years on the force, I think I have some idea how an investigation is undertaken. As a result I have a hard time reading crime fiction as very few detective or police novels ring true to me. I just don't believe them.

On a wider scale, I've recently read a few short stories that simply annoyed me because the characters didn't ring true either. Something felt wrong - their actions and reactions or thought processes seemed unlikely. Even entire situations asked for a much greater suspension of disbelief than I was prepared to give.

Some short stories require certain actions from characters in order to drive the plot, and these never work for me. Others require a situation to occur that is all too unlikely, and again that is where the writer loses me.

In my real life, I've had the most amazing co-incidences. My wife moved to Australia from the UK only to discover that her long-lost relative (who they didn't even know was in Australia) had a grandchild in my class at school. Afterwards people said "You wouldn't read about it."

That's true. Co-incidence in fiction doesn't work with the reader because it's recognised as being created in order to move the story along.

I still have a long way to go with my writing, but I think I'm getting better at creating characters and situations that are believable.

Well, at least as believable as a Bug-Eyed Monster from Planet-X can be.
Posted by Steve Cameron at 9:19 AM