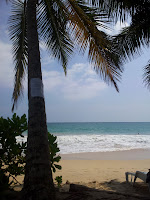 I recently completed the Jack Dann workshop, held at Writers Victoria. It consisted of five sessions, roughly a month apart. And while I found it very useful and valuable, it wasn't exactly what I'd thought it was going to be.

I guess I really wanted a masterclass.

There was an extremely diverse range of experiences among the participants - from a few who had never written a sentence before to a couple of us with a history of publications. As such, much of the critiquing was aimed at the beginners.

I read of writers in the U.S. that attend workshops held by Orson Scott Card, or Kris Rusch and Dean Wesley Smith, Mike Resnick, or other writing luminaries. You often need to audition, to submit a piece of writing to attend these workshops before the participants are selected.

I rarely see any SF workshops like that advertised here.

Earlier this year, I looked at an online course advertised by Tracy Hickman. It looked good, the price seemed reasonable but the time was wrong. I'd just signed up for the Jack Dann thing and was finishing up a university course. I decided I would wait until the second half of the year before applying.

I checked it out recently - credit card in hand, and was rather surprised to see that the course had been restructured to involve live online sessions and the price had increased dramatically. More than doubled, in fact.

I'll pass, for the moment. And I'm not disparaging Mr. Hickman. I'm sure his course is excellent. It's just that it's more than I'd planned to spend at that time.

Clarion in Australia is on indefinite hiatus and, even if it re-commenced, taking the six weeks required to attend would be far too costly. (And I think my wife would not be happy.)

If anyone knows of any great online workshops run by people who know their stuff and at a reasonable price, I'd love to hear about it.

I've found the biggest improvements I've made in my writing were immediately after the Jack Dann course, and the Paul Haines mentorship.

And I'm all for improving my writing.
Posted by Steve Cameron at 3:05 PM

I've had to submit writing for workshops at the Sydney and Brisbane Writer's Festivals before. Keep a sharp eye on the programs, because it's all about the guest writers. I think Margo Lanagan is teaching in Fiji sometime soon, Joe Abercrombie is coming to Genrecon and Nalo Hopkinson is coming to Conflux 2013. Just make sure you get your hands on All The Programs the second they come out, and anything that looks expensive and/or sold out will usually be what you want ;)

I'll possibly end up joining Hickman's online course - I'm sure it's excellent value for money. It was just more than I'd anticipated.

There are some workshops at the events you've mentioned above, but they tend to be a couple of hours, rather than a weekend or similar - which is what I'd love to do.

And yes, I know of the Lanagan workshop too and a couple of others in the US etc - but once you start adding internaitonal airfares and so on...

Oh well, as you said, I'll just have to be more vigilant.

I like your site, you have some interesting posts. My site My Perfect Pitch compliments yours, consisting of interesting articles from a published author, plus a free resource of over 1000 traditional book publishers currently accepting submissions - the largest on the web. Keep up the good work.