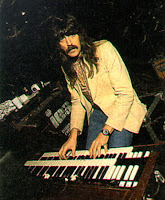 We have lost Jon Lord.

When I was a teenager, a friend and I would occasionally go on weekend fishing trips. On one such trip, up at Eildon, we met this other guy who was also fishing. The three of us sat around the fire at night and listened to music.

This is the first time I recall really hearing Deep Purple. He played us Made in Japan, and I loved it. I traded a Kiss album for the Deep Purple double live album a few days later. I still think it was a great deal for me.

Over the years I've seen the band around seven times. I was lucky enough to see the Mark 2 lineup in their 1984 Perfect Strangers tour. In 1999, I was in the tenth row at Rod Laver Arena. Every time Jon Lord hit the low notes on his Hammond organ and the leslie speakers started spinning, you could feel it right through your stomach.

Don Airey is a fine and fitting replacement.But Jon Lord's Hammond organ sound was so integral to Deep Purple that they were never quite the same after he retired.

And now he has lost his battle with pancreatic cancer.

Tonight I will raise a glass to his memory and listen to some of his finest moments.
Posted by Steve Cameron at 1:48 AM