A Tale Of Caution. 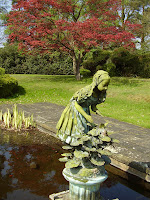 Apparently Dean Wesley Smith, amongst others, tells the story of a writer who was submitting to a whole lot of magazines over the period of a few years. Smith refers to this man as Topanga Canyon, as that was where the writer lived. The writer was submitting good work and was regularly receiving personal rejections. The editors, in fact, all knew his name and were watching to see who would be the first to buy his work. Even agents knew his name. He was really close.

And then for no apparent reason in 1991 he stopped submitting and was never heard from again.

This story was mentioned briefly on a forum I visit, and one of my fellow frequenters, Preston Dennett, read the story and thought it sounded like it could have been about him. He used to live in Topanga Canyon, he was subbing around that time, and he gave up because he didn't think he was getting anywhere and his non-fiction writing was starting to take off. So he shot off a quick email to Dean Wesley Smith, and sure enough, Preston was Topanga Canyon.

Part of him is elated that he was known by editors and agents, and oh so close. The other part of him is devastated. I know I'd be wondering what might have been.

I don't know how those personal rejections were worded, but maybe a few extra words - something that could have helped him realise just how close he was - might have made all the difference. He's started writing fiction again, and this time he's planning on success.

Don't give up. And if an editor asks to see more of your work, believe it.
Posted by Steve Cameron at 3:30 AM

That's sad but inspirational. I hope his fiction takes off as well as his non-fiction did.

One of the things about living in this century is that we can get a bit of an idea of what editors are like, if they are blogging.