Wow, What's That Splinter In Your Eye? 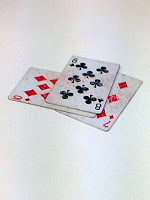 For many years I've told people that I don't particularly like horror. I don't read it and don't watch horror films. A couple of years ago someone lent me a Stephen King book and told me I had to read it, and although I enjoyed it (and he does write great dialogue), it didn't thrill me. So I find it rather ironic that my first publication will be in a horror anthology.

I didn't mean for it to happen like that. It happened by accident. You see, I tend to write SF - although I've written a couple of stories that were slightly supernatural based. In fact one of them, a ghost story, I didn't consider to be horror at all - but it did seem to fit into the Festive Fear format. And so before I submitted it to Tasmaniac, I e-mailed and queried to ensure I wasn't wasting the publisher's time. What I've slowly come to realise over the past six months is that my definition of horror was all wrong.  All the time I was telling people I didn't like horror, I was actually reading a lot of it.

One day I suddenly realised half the Twilight Zone and X-Files shows I've seen are horror and, of course, Buffy spends all her time battling demons and vampires. As for all those Jonathan Carroll books I've been reading and loving for 25 years? Turns out they're horror. (I just figured they were weird fantasy with a dark edge.)

I've just finished reading a few anthologies of horror stories - and most of them turned out to be not what I expected. What I realised I meant is I don't like the blood and gore horror - slasher stuff. And although I'm still not huge on the evil supernatural horror, one of my best friends has been working on me, making me watch old Hammer Horror films with him. Yeah, I know - they're pretty lame by modern standards, but it's a start.

So here I was accusing people of pigeonholing genre, saying they don't like SF while praising Avatar and so on - only to find I was doing it myself.

I promise to be more open to different genres from now on, OK? (Mills & Boon is still out, though!)
Posted by Steve Cameron at 9:52 AM