Tell Us About Yourself... 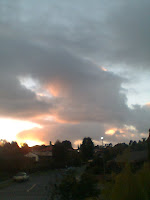 How do you write about yourself without sounding like an idiot?

This week I had to write my bio for my upcoming publication, and I suddenly realised I didn't know what to write. Obviously 3rd person works best in these cases, but apart from that? I had no idea. So the first thing I did was grabbed some anthologies and read what others had written. My next step was to do a quick internet search to see if there were any recommendations.  I did find one site that had some good information.

Some writers try to use humour, making self deprecating jokes or trying to show themselves as zany. I can see this works for some people, but I quickly realised it wouldn't work for me.  Which was a bit of a shame, as I had thought about paraphrasing Polly from Fawlty Towers. "With the sale of this story, Steve is now earning enough as a writer to keep him in teaching."

Some writers also include their pets - especially if they are cats. Since cats and I are mortal enemies, that was never going to happen.  I thought about mentioning my dogs, but figured they'd never read it anyway.  No, mentioning pets just wasn't going to work for me either.

It's easier too if you have some publications behind you. Unfortunately I don't.  I considered making up a few. "Steve's work can be found in such titles as Queasy Stomach Vol.4, Uneasy, Dry Retch and I'm Making This One Up." That was just going to make me look sad if anyone ever decided to actually hunt for these things.

Same with awards.  I haven't been nominated or won anything yet. No Ditmars, Aurealises (Aurealii?), Chronoses (Chronii), or anything else.  I could have added, "Steve has a Bronze Swimming Medallion and holds Level 2 in First Aid. He has recently been nominated for the Nobel Peace Prize."

Same with the ubiquitous, "Steve is working on his novel."   I'm not.

In the end I decided to be honest, straight to the point and serious.  It's what works for me. Of course once I discussed this with my friends, they all volunteered to write one for me.

Now that would have been embarrassing.
Posted by Steve Cameron at 9:10 AM

Scott Tyson had the same trouble. I just grabbed a book from the shelf and followed the format. Lucky I chose the right book... :D