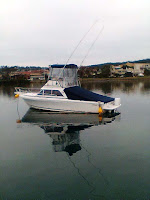 I've just spent a week holidaying at Merimbula. A splendid time indeed, and I didn't really have internet access. There was a signal, but it took 5 minutes or more to load each page - if it loaded at all.  In the end I decided to ignore the outside world and get on with my relaxation.

I know I've previously used the fishing metaphor in regards to writing, but it really hit home a couple of times this week as I stood in the surf creating storylines and hoping to catch some dinner. Over the week I tried a couple of styles of fishing this week. Once I was with some other people, lines straight down into the water.  A few nibbles but little success. Except for one guy, who seemed to have no technique, no skill or experience, was using the same rods and bait as me but was just reeling them in. Sigh.

I've had those nibbles from editors while I've seen a couple of others sell their first story.

I tried surf fishing too. Lots of casts, with the occasional strike.  I was able to reel in a couple, only to lose them in the surf right in front of me. Reminds me of the seven months one of my stories was on hold before the editor slipped off the hook at the last minute.

Another day I tried the same thing and actually caught a couple. Same technique, same place, just a different day.  I have no idea why they were biting that morning and not the previous day.

But it all comes down to persistence. Changing things around, switching baits, hooks, seeking advice from those that know the waters and keep throwing those lines back in the water.

And yes, I had a feast of freshly caught tailor one night.  Delicious it was.

Just watch out for the sharks.
Posted by Steve Cameron at 5:09 AM