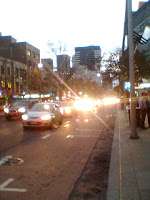 A while ago I wrote a story that I really liked. A few other people really liked it too.  I sent it out, and it received great comments, but no one picked it up. I was told it was well written, but basically lacked action. The protagonist is passive.

Which is true - he is. And that was how I wanted the story to be. Paul Haines, under the mentorship program sponsored by the Australian Horror Writer Association, has been workshopping it with me.  He's given me some fantastic feedback on the story and has caused my thoughts and ideas to head off in areas I hadn't considered.

And so now I'm rewriting parts of the story, introducing a new character, and just trying to tighten the thing right up.

But all this is flowing over into the story I'm currently writing. I've started applying these thoughts over there as well, and it's making for a much better story.

I've never been overly fond of critique groups - my minimal experience with them hasn't been great - but I definitely see the value in having readers who know what they are talking about. And I've been fortunate enough to build up a couple of them.  I just need them to get a little harsher with me.
Posted by Steve Cameron at 6:22 AM