Who's My Favourite New Kid On The Block? 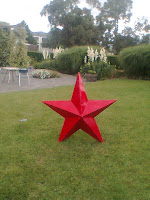 I first heard of Bill Hicks back in about 1994.  A guy who later became one of my best friends told me about this chain-smoking, cursing comedian and described some of his routines for me.  A little later he gave me a copy of one of his videos.

At the time I was living in Japan, and, I think, the video had been taped from TV. I loved that tape.  I love the performer, and I loved what he had to say.  It was only later that I discovered he'd died a few months before I learned about him. Age 32, pancreatic cancer.

I've been watching, reading and listening to quite a bit of Bill recently - and even though his routines are around 20 years old they are still very relevant. Nothing has really changed, politics is still dirty, people are still lying and have double standards, Billy Ray Cyrus is still making money and has quite a bit of popularity.

I picked up the book, What Would Bill Hicks Say?, a series of rants from contributors who are attempting to channel Bill in order to describe the 21st century. Unfortunately, none of it sounds like Bill at all. I tried to imagine Bill with those rants - and while some of the phrases, the structures - heck, even the cuss words - are the same, they aren't what Bill would say at all. I don't know what Bill would say, but these rants just didn't have his voice.

I enjoyed the read - don't get me wrong, but it's a bit like Glenn A. Baker describing Crowded House as exactly what the Beatles would sound like if they were recording today. Um, No Glenn, they don't.

But what I got to thinking was this.  We need Bill Hicks around.  We need his rants, and we need his thoughts on Evolution. Unfortunately he was censored in his own time. Heck, even Letterman (a self proclaimed fan who had him on the show 11 times) censored him on the 12th spot - pulled his entire routine hours after recording.  And this was AFTER Dave's people had approved the script, told him he did a good job and mentioned him in the show's outro.

Of course he'd still be censored now, but we need him. Like we need Hunter S. Thompson (the Fear and Loathing guy, not the later self parody one).  And we need the old Rolling Stones.  And we need rock 'n' roll music to be dangerous again, and not something mothers take their kids to see.

A contemporary, Sam Kinison's gravestone says, In another age, he would have been called 'prophet'.  I think that epitaph suits Bill more.
Posted by Steve Cameron at 10:31 AM