The Future's So Bright... 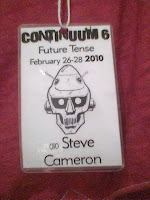 I arrived home an hour or two ago, unpacked, had dinner, and I'm now writing this. As I go I'm digesting everything I learned over the weekend, and I think I'm deciding the future is something to be excited about rather than feared.

Sure, a healthy dose of respect is necessary, but I don't have to be scared. I have no idea what's going to happen - technology is not only becoming increasingly prevalent, it's becoming increasingly vital to living in the modern world. And as I get older I know it's going to become incredibly more difficult for me to keep up with advances.  Already the kids at my school are communicating, socialising, learning and living in ways that are alien to me.  What's it going to be like in 20 years time?

But there's so much exciting stuff happening. Mark Pesce, the guest of honour for the weekend, spoke about the coming technological singularity - and how it's going to affect us. (Of course he pointed out that we are now past the point of no return. Too late to run, folks!) And while I don't want to spend my life connected to an iSomethingorother, there's plenty of other good stuff there that will interest me.

And anyway, the end of the world may occur in 2012 and none of it will matter anymore.

p.s. More on Continuum 6 after I've had some sleep!