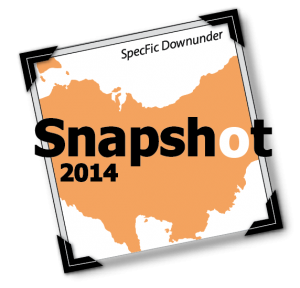 The Aussie Snapshot has taken place four times in the past 10 years. In 2005, Ben Peek spent a frantic week interviewing 43 people in the Australian spec-fic scene, and since then it’s grown dramatically. It now takes a team of interviewers working together to accomplish!

In the lead up to the World Science Fiction Convention in London, Snapshot 2014 will be blogged at the below links.

Last time nearly 160 members of the Australian speculative fiction community were interviewed for the Snapshot. I was interviewed in 2012 - keep an eye out for my forthcoming interview for 2014.

To read the interviews hot off the press, check these blogs daily from July 28 to August 10, 2014, or look for the round up on SF Signal when it’s all done:

(This post was stolen and adapted from David McDonald's website with permission)
Posted by Steve Cameron at 2:43 PM