Time For A History Lesson. 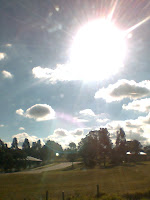 There is currently some fantastic Spec Fic coming out of Australia. And some wonderful small publishers grooming the next crop of writers. But it only just occurred to me that I have very little idea of the tradition of SF writing in this country.

Sure, I know of Damien Broderick writing in the 70s, and the publishing work of people like Bruce Gillespie and Paul Collins, and I've even heard of a guy called George Turner from the 60s.

It's always cool when you receive an email from, or meet an author you've been reading for a while. That's happened to me with all the above (except Turner) and several others. It turns out that I originally met Paul Collins around 25 years ago. An old friend of mine, Steve Dash ( A talented artist indeed. You still around Steve? Still painting?), did the artwork for The Tempting of the Witch King (Russell Blackford) and Ring of Truth (David Lake) and introduced me to Paul when he ran a shop down in St. Kilda. And it's very cool seeing Paul still around and still publishing. Then there was the new breed of writer that came to the fore over the past 25 years. (Lucy Sussex, Sean Williams, Greg Egan, Terry Dowling) I've been lucky enough to meet some of them too - and even to be on first name terms with them. And I've met several of the up and comers.

We've certainly had a long history of fandom here. Melbourne Science Fiction Club is the second longest running SF club in the world.

But what about writers of Australian SF before the 70s. There's only one that I really know of. I went to school with a kid who was the niece, or granddaughter, or something, of Ivan Southall who wrote the Simon Black series. Unfortunately, I only ever read his adventure books. But surely there had to be SF written before that.

It looks like Aurealis Publishing is about to rectify the gaps in my knowledge.  Just in time for Worldcon 68, they are reprinting 'lost' Australian classics, dating from between 1880 and 1930.  A set of six to start with, and then I believe there will be more on the way. This is a series I'm looking forward to reading.

And don't forget to vote for the Ditmars.
Posted by Steve Cameron at 7:27 AM