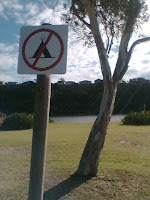 It's been an interesting kind of week here at Chateau Cameron.

First of all my slipped disc (or bulging disc or pinched nerve or whatever it is) re-slipped.  It's been playing up for close to a year now, but this is the worst it's been. My back, legs and feet were in all kinds of pain which made walking very difficult. And, on top of that, I had that stupid chest bug that everyone seems to have at the moment. And so I was off work for a couple of days, hobbling around like a little old man and coughing like a seasoned smoker.  Thank goodness my doctor referred me to a physiotherapist who seems confident it'll all be sorted soon.

Of course something else just had to occur to make things worse. And so my hot water system decided to blow up. The Blu-Ray player I'd been planning to buy last week is now back on hold. Apparently, according to my wife, showers are important. And while I can see that, I think it's a very fine line as to which is more important - hot showers or a Blue-Ray player.

To cheer myself up, I grabbed the opportunity to read a couple of books. The Road and Things We Didn't See Coming. Both these books are post-apocalyptic, (and for those out there who didn't realise, they're both Science Fiction!) with various degrees of bleakness. Yay, happy time!

I've been wanting to see The Road on film for a long time, but I wanted to read the book first. And now that I'd finally gotten round to that, I was able to jam the DVD in the machine, press play and curl up on the couch to watch it.

I loved the film - although not as much as the book. The film is suitably grey and (dare I use the word again?) bleak. The book allows for less use of dialogue - it's much more sparse and restrained which I thought was wonderful. Being a Hollywood film, I was concerned they'd change the end to have them arrive at a commune where they are welcomed, blah, blah, blah.  Much like they did with I Am Legend.

Things We Didn't See Coming isn't as grey - it's a series of short stories that travels across many years showing life under many forms of government and authority - or even non-government and anarchy. It works well, and I thoroughly enjoyed it as well.

And on the subject of bleak, that's exactly the forecast I have for the new movie that's coming out in August, Titanic 2.

And I'm not joking.
Posted by Steve Cameron at 2:23 AM

Labels: I Am Legend, The Road, Things We Didn't See Coming, Ttianic 2