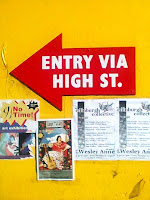 Last week I read an internet article written by someone involved in publishing.  This person was writing about small press publishers and how important they were to not only emerging writers, but to the publishing industry in general. The writer commented on how these small publishers filled niches and satisfied readers of genre that the larger publishers wouldn't touch due to economics.

Then this writer selected a couple of small publishers (by name) and proceeded to praise one (publisher A) while viciously attacking the other (publisher B). Publisher A could do no wrong, while Publisher B was doing nothing but harm to writing in general. The reasons given? Publisher B had poor editors, terrible layouts (with examples given) and was heavily criticised as being nothing more than fans turned publishers.

Except for one thing.  It so happens I have several anthologies from both these publishers. And what I've noticed is this.  The perceived faults with the layouts described for publisher B are exactly the same as those found in publisher A's work. I found as many 'missing words' in sentences in both, while in Publisher A's work, I found more mistaken homophones - really obvious ones too. As for the quality of the selected writings? Well, I found both had excellent inclusions, both had a couple of average ones, while Publisher A even had one or two that were just poorly written with several examples of confusing and amateurishly constructed sentences and paragraphs that were embarrassing to read.

I enjoyed the work from both publishers - I just wonder what the writer of the article had against Publisher B, and whether the writer had any sort of interest in Publisher A. And, of course, it's a shame there were grammatical and editing mistakes in both of these publisher's works.

It does make you remember one thing, though. Keep an open mind on reviews, unless you see the same comments pop up over and over again.

(Unfortunately I didn't bookmark the article at the time, and can't seem to find it now.  I'm sure it must still be out there under layers of other webpages.)
Posted by Steve Cameron at 7:40 AM